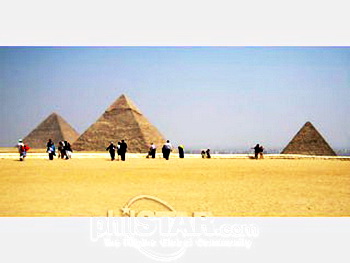 I have now walked through the “Land of the Pharaohs and the Prophets” and it was unforgettable.

Egypt is one of the countries included in the Insight Vacations’ tour called “The Land of the Prophets.”

Just recently, I luckily joined this tour. I longed for the day when I could finally get into this magnificent country. Insight Vacations had to cancel several of its tours to Egypt even after the recent uprising in this country. When the situation became better, the tour operator resumed the tours, assured safety and finally signalled me to go to one of my dream destinations.

We arrived in Cairo and checked in at the Marriot, a beautiful hotel whose function rooms and restaurants were actually part of an old palace. It was a day of rest before flying out to Luxor, the former capital of the New Kingdom. We boarded our ship moored privately near the edge of the town for our four-day cruise on the Nile River. We had our lunch while heading over to ancient Thebes and our first land excursion in Karnak, the largest temple complex ever built by man, constructed over a period of 1,500 years. The experience to walk through the avenue of ram-headed Sphinxes, walk past the statue of Ramses II, and stand in awe among the huge columns of the vast Hypostyle Hall, was a great introduction to Egypt.

After breakfast the next day, we crossed to the west bank of the Nile and stopped by the towering Colossi of Memnon — two giant seated figures that were all that was left of Amon-Ofis III’s mortuary temple. A stop at the Temple of Queen Hatshepsut and the Valley of the Kings, the burial place of many of the New Kingdom pharaohs, was also part of the itinerary. The Valley of the Kings was where the tomb of Tutankhamun was found, but all the treasures in the tomb were transferred to the Egyptian Museum in Cairo.

The following day, we visited the beautifully preserved Temple of Horus (the Falcon God), possibly the most complete in Egypt. We then went to Kom Ombo, a temple dedicated to both Horus the Elder and Sobek, the Crocodile God. The temple was as beautiful as the next temple we visited, the Temple of Isis, rising from the waters of the Nile on the island of Philae. Later during the day, we returned to Aswan and sailed on a traditional Nile felucca around Aswan’s Botanical Gardens. There was also an optional tour to a Nubian village, which I opted to take. There, I saw the village, the Mausoleum of Aga Khan, the start of the Sahara Desert, the Cataract Hotel and enjoyed high tea in English colonial style before sunset at the very top of the Mövenpick Hotel.

We checked out of our cruise and took another optional tour to Abu Simbel. We flew to see the two colossal temples. The twin temples were originally carved out of the mountainside during the reign of Pharaoh Ramses II in the 13th century B.C., as a lasting monument to himself and his queen, Nefertari. The complex was relocated in its entirety in 1968 on an artificial hill high above the Aswan High Dam reservoir. We flew back to Cairo after the unforgettable Nile cruise and the wonderful experience in Abu Simbel.

From Cairo, we drove to Memphis to see another massive statue of Ramses II and the Alabaster Sphinx. Nearby at Sakkara, we saw the Step Pyramid of Zoser, the oldest pyramid in the world. Of course, the highlight in Cairo was a visit to the Pyramids of Giza and the Sphinx! We were even able to enter one of the pyramids and see a light and sound show at night.

Our last day in Cairo had us visit the Citadel for a breathtaking view of the city of Cairo and the great Mosque of Mohamed Ali. Finally, another thing I had been waiting for, we visited the Egyptian Museum to see the splendid treasure recovered from the tomb of King Tutankhamun. I must have spent an hour in that room alone because those treasures, especially the mask, were some sight to see!

While in Egypt, I never felt unsafe. Maybe news about Egypt was slightly exaggerated on television. I thought Insight would never compromise the safety of its clients and I felt safe when it said it was already okay to go. I was glad I did since this trip would be etched on my mind as one of the best and most comprehensive trips I have ever had in one particular country.

Watch out for the last part of this Insight tour series, my story on Jordan, in this column!

Etihad Airways flies twice daily for a total of 14 flights a week to Abu Dhabi. With its new partnership with Air Berlin, it will open new destinations within Europe and the rest of the world. From its hub at Abu Dhabi International Airport, Etihad serves 72 cities in the Middle East, Africa, Europe, Asia, Australia and North America, with a fleet of 61 Airbus and Boeing aircraft. It has more than 100 aircrafts on order, including 10 Airbus A380s. Etihad Airways is the official partner airline of Rajah Travel for Insight Vacations. Its office is located at the 22nd Floor of Tower 1, Enterprise Center, Ayala Avenue, Makati City. Check its website at www.etihadairways.com.)